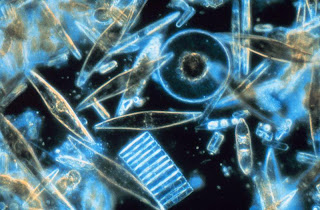 This blog has been moving from a macro level view of toxins of power, then excavating down ever deeper and deeper, beginning with ancient concepts then moving down all the way into hot current research.

To put it another way, during this journey we have been excavating deeper, beginning from macro-level circumstantial observation, then digging downward into meme theory, and now we are going even deeper, down to the very foundations, using earth shaking recent microbiology research.

This post, today, concerns the implications of known symbiotic conditions between microbes and humans.

One implication leads to a hypothesis that this post will set forth: microbes are one suspect source for the origin of toxins of power.

(Before we move on in this post to expand upon that hypothesis, let's remember that some of us react negatively to information that would challenge what we already know.

That is why researchers, who happen to find out that our current knowledge on a given topic is in error, can have a difficult time presenting their discovery to the rest of us for validation.

Now, jumping into some macro considerations for a moment, I am aware that religionists will tend to think that the toxins of power originate with a different source, while others, whether religionists or not, may think that the hypothesis of this post violates the notions of dualism.

Let me just say that those concepts are beyond the scope of this post's hypothesis, and even if one or all of them are correct, it does not ipso facto disprove this hypothesis.)

The great bulk of microbes are good for us, such as the diatoms in the graphic above, and are even essential sources of food and other necessities for life on Earth.

So, to soften the potential impact on our built-in bias this hypothesis "microbes are one suspect source for the origin of toxins of power" may have, I will start off with some quotes in order to set some parameters indicating the scope of the power of microbes.

In a recent post Toxins of Power Blog pointed out:

Microbes may indeed be subtly changing our brain early on — and for what purposes we cannot yet say. The article would imply that this interaction is beneficial to us, and thus indirectly to our microbiota, but the mere fact that microorganisms can shape our minds brings up many more questions about how humans develop their identity.

(A Structure RE: The Corruption of Memes, quoting, inter alia, microbiologists at The American Society of Microbiology). Note next, the quirky information about when microbes begin to have some effect on us:


The first 9 months of our existence – the time we spend in our mother's womb – is the only period of our life during which we are free of microbes. Our delivery from this parasitic existence into the outside world exposes us to an enormous range of microbes from a variety of environments – our first encounter with life forms which have an anatomy, physiology, and metabolism very different from those of our own.

(An Introduction to the Human–microbe Symbiosis). It seems strange to me that microbes are "hands off" during our embryonic phase, waiting until our mother gives birth to us before initiating symbiosis, but lets move on.

A quote from "An Ecological and Evolutionary Perspective on Human–microbe Mutualism and Disease" is offered so as to quickly set one corner of the foundation of the hypothesis:


"For example, microbial symbionts that secrete molecules that inhibit host pathogens (known as pathogen interference) or detoxify compounds that harm the host can augment the lifespan and reproductive capacity of the host, thereby giving the symbionts more opportunities to spread."

(NATURE, Vol 449, p. 811, or see here, emphasis added). Our symbiont microbes fight pathogens which could cause disease in us,

as if those microbes were part of what we have always considered to be our human immune system.

To that let me add that we know that microbes can do things within the realm of quantum physics:


A team of University of Toronto chemists have made a major contribution to the emerging field of quantum biology, observing quantum mechanics at work in photosynthesis in marine algae.

"There's been a lot of excitement and speculation that nature may be using quantum mechanical practices," says chemistry professor Greg Scholes, lead author of a new study published in Nature. "Our latest experiments show that normally functioning biological systems have the capacity to use quantum mechanics in order to optimize a process as essential to their survival as photosynthesis."

(Tiniest Scientists Are Very Old, emphasis added). I think we can see that it is really not a stretch to contemplate that a microbial symbiont within us has abilities to fabricate molecules, and that perhaps in so doing they have ability to resort to lower level work at the quantum physics level.

We are informed that the science concerning human-microbe symbiosis is itself embryonic, and has a great distance to go:


"Researchers have only just begun to describe the microbial communities that are associated with humans and the extent of the interactions between host and microbiota. Understanding this symbiotic ‘landscape’ will require research that spans the biological hierarchy from molecules to communities and is informed by ecological and evolutionary theory. Only with an integrated approach will it be possible to comprehend the complex ecology of human health and the many ways in which interactions between humans and microorganisms can go awry. The first step in improving our understanding is to describe the composition of microbial communities in each habitat of the human body and how this varies over time, among individuals and with respect to variables such as diet, host genotype and health status. This project is now in its early stages, with the first successful forays having laid the groundwork for more ambitious studies, such as the Human Microbiome Project."

(ibid, NATURE,p. 817). Nevertheless, the imphttp://www.pnas.org/content/108/7/3047.fullact some of these discoveries have already had ought not to be underestimated:


Several recent studies highlight remarkable examples of how a co-evolved microbiota can markedly affect host biology at the molecular level, and these findings call for a complete re-examination of human physiology and immunology. Attributes that were assumed to be human traits have been shown to result from human–microbe interactions.

(ibid, NATURE,p. 817, emphasis added). The phrase "a complete re-examination of human physiology and immunology" is earth shaking in its own right, but that earth shaking does not stop there:


Microbial colonization of mammals is an evolution-driven process that modulate host physiology, many of which are associated with immunity and nutrient intake. Here, we report that colonization by gut microbiota impacts mammalian brain development and subsequent adult behavior. Using measures of motor activity and anxiety-like behavior, we demonstrate that germ free (GF) mice display increased motor activity and reduced anxiety, compared with specific pathogen free (SPF) mice with a normal gut microbiota. This behavioral phenotype is associated with altered expression of genes known to be involved in second messenger pathways and synaptic long-term potentiation in brain regions implicated in motor control and anxiety-like behavior. GF mice exposed to gut microbiota early in life display similar characteristics as SPF mice, including reduced expression of PSD-95 and synaptophysin in the striatum. Hence, our results suggest that the microbial colonization process initiates signaling mechanisms that affect neuronal circuits involved in motor control and anxiety behavior.

In the next post of this series we will review the impact that pollution has on the environment, specifically on microbes, then tie that data into the hypothesis.

From there we can follow the domino effect that pollution could have on microbial performance.

Moving on from there, in light of these recent discoveries set forth above, we can follow the impact on symbiont microbes on to potential impact on our human cognition.

That is, we will move from potential impact in general on toward the impact on specific symbiont microbes that could cause, in turn, specific behavior impacting the generation of toxins of power.

The purpose of developing that pathway is to tighten up the hypothesis (build a reasonable, valid nexus) as we move along forward, from post to post.

The next post in this series is here.
Posted by Dredd at 8:55 AM 3 comments: