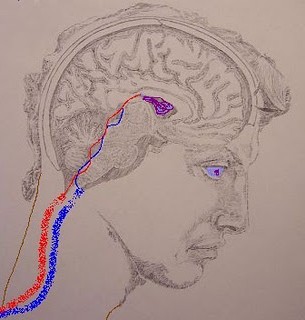 "What we have here is a failure to communicate" was a famous line uttered in the movie Cool Hand Luke, starring Paul Newman.

In the search for the origin of the toxins of power, we have considered how ideas and memes are communicated, then stored in memory.

We have also considered, at the higher levels of memory, how those memes and ideas can morph in various ways while still there in memory.

Lately, we have been considering some lower levels of brain activity where tiny, unseen components of memes and ideas in memory involve or require microbial signaling and messaging, as well as the proper handling of that microbial communication.

The understanding of thought generation and processing within the brain involves and requires a serious consideration of these most abundant, these tiny, and these unseen components, which microbiologists call either symbiont, or non-symbiont, microbes.

The Toxins of Power Blog's search for the origin of the toxins of power has led to a hypothesis ("The Hypothesis"), after considering just how important those microbes working within us are, especially in terms of their communication with our other cells.

In an ongoing series here on this blog we have hypothesized that one source of toxins of power is microbial signal or message malfunction:


Not only that, The Hypothesis is further condensed to state that a toxin of power is generated in one or both of these processes, within either symbiont or non-symbiont microbes, by way of "bad messaging" during common, constantly ongoing, human - microbe communications.

(Hypothesis: Microbes Generate Toxins of Power). "What?", the most abundant life form which is also the oldest life form, microbes, still experience the phenomenon of a failure to communicate like Cool Hand Luke did?

Concerning this aspect of the subject matter of communication, which we could call the struggle for clear communication, Dredd Blog has discussed human, language-based hermeneutics in the post "Hermeneutics For The Blogosphere" (cf. Modern Hermeneutics).

So in this post, here on Toxins of Power Blog, we will consider the notion of microbial hermeneutics as an aid to improving The Hypothesis.


Imagine a graduate student with two thesis advisors. One suggests focusing on the experiments. The other suggests some mathematical modeling. What should the student do? The first strategy might involve doing a little of each, effectively ‘‘averaging’’ their advice. Prioritizing one mentor over the other could be a second option. Finally, when the best choice is unclear, it may be best to flip a coin. Bacteria, which live in complex environments, face similar problems and must respond optimally to multiple conflicting signals.

(Molecular Cell, Volume 42, Issue 4, p. 405, PDF, HTML). The Earth is rife with signals and communication, for example, a while back the cherry blossoms in Washington D.C. were blooming at the beginning of February 2012, a month or so earlier than the climate there calls for.

At that same time, around the nation, the ongoing "snow drought" and warm temperatures were sending signals to the flora and fauna which, as it turns out, were confusing communications that affected a proper understanding of what should be done (blossom, sprout, or stay dormant a while longer?).

That is because it can be dangerous when flora and/or fauna receive signals which normally indicate that spring is here, then as a result errantly go into "spring mode", to be later damaged by what is then a surprising, and seemingly untimely cold snap.

Likewise, the most abundant kind of cell in us, microbes, can also receive ambiguous messages, as shown in the paper "Resolution of Gene Regulatory Conflicts Caused by Combinations of Antibiotics", for example when we improperly use antibiotics:


Quorum sensing is the regulation of gene expression in response to fluctuations in cell-population density. Quorum sensing bacteria produce and release chemical signal molecules called autoinducers that increase in concentration as a function of cell density. The detection of a minimal threshold stimulatory concentration of an autoinducer leads to an alteration in gene expression. Gram-positive and Gram-negative bacteria use quorum sensing communication circuits to regulate a diverse array of physiological activities. These processes include symbiosis, virulence, competence, conjugation, antibiotic production, motility, sporulation, and biofilm formation. In general, Gram-negative bacteria use acylated homoserine lactones as autoinducers, and Gram-positive bacteria use processed oligo-peptides to communicate. Recent advances in the field indicate that cell-cell communication via autoinducers occurs both within and between bacterial species. Furthermore, there is mounting data suggesting that bacterial autoinducers elicit specific responses from host organisms. Although the nature of the chemical signals, the signal relay mechanisms, and the target genes controlled by bacterial quorum sensing systems differ, in every case the ability to communicate with one another allows bacteria to coordinate the gene expression, and therefore the behavior, of the entire community. Presumably, this process bestows upon bacteria some of the qualities of higher organisms. The evolution of quorum sensing systems in bacteria could, therefore, have been one of the early steps in the development of multicellularity.


An alternative view is that cells use simpler ‘‘rules’’ to determine
appropriate gene expression levels in response to conflicting signals. But what do these ‘‘rules’’ look like, how complex are they, and to what extent can they be used to predict the response of cells to novel signal combinations?

These issues are increasingly critical throughout biomedical science. Single-cell organisms such as bacteria can live in extraordinarily diverse environments, in and out of hosts, and surrounded by other microbial species and the antibiotics that many of them produce. In this milieu, signal integration abilities are critical to survival. Similarly, in metazoan development, individual signaling pathways rarely work in isolation; rather, cellular responses depend on combinations of inputs from multiple pathways ...

(Molecular Cell, Volume 42, Issue 4, p. 405, emphasis added). Reiterating The Hypothesis, it does not seem to be too much of a stretch to say that toxins of power are possibly a result of message malfunction at this deep level of communication within us, since it is clear that "bad messaging" can and does happen there.

Furthermore, even the misinterpretation of a valid signal, because of inadequate microbial hermeneutic techniques, could have as much of an adverse impact as an improper signal in the first place could have.

Therefore, I also consider the realm of microbial hermeneutics to be a valid suspect as a source for toxins of power.

Before continuing, notice how similar this concept of microbial hermeneutics is to the scenario of a jury receiving mixed, conflicting messages from expert testimony in a courtroom trial.

Like microbes trying to resolve conflicting signals, the jury must use legal, and other, hermeneutics to resolve the conflict between or among experts, even though the jury is not composed of experts (The Pillars of Knowledge: Faith and Trust?).

Since this post is getting to be a bit long, I will close for now.

In the next post of this series we will consider a more complex area of microbial signaling and communication, which is the incredible "cell factories" that are better known as "stem cells."

They certainly seem to be another possible area where toxins of power could be generated, and therefore, should also be considered.